MOVED – Are You the Next Spindletop? 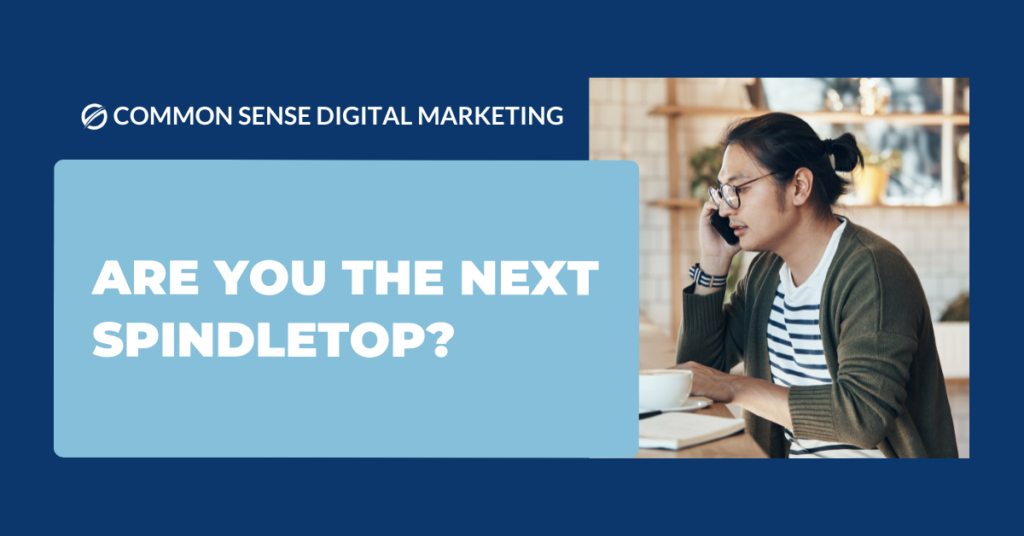 There has been a lot of talk lately about how to “really” make money online.

Some say “follow your passion and the money will come”.

It’s hard to see that advice work if your passion is watching reruns of the Mentalist.

Others say “business is business – you don’t have to care about what you do to make money”.

I doubt that Donald Trump is passionate about every project his company undertakes. But I’m 100% sure he cares very much about making money.

So where is your truth to be found?

What is the key that will unlock the door of your potential and lead you to the online business you really want?

I think the key is found in the story of Spindletop, the world’s most productive oil well.

The story of Spindletop is a simple one … with powerful implications for you and me right now, today.

In the late 1800’s there was a farmer/rancher who was in trouble financially. So much so that he was considering selling his land and giving up.

Then one day a man from an oil company came by to ask if he could drill on the land.

The oil company land man said something like “we will drill at our cost and, if we find oil, we will split the profits with you”.

The farmer had nothing to lose and a lot to gain so he said yes.

Long story short – the oil well they drilled produced more than 100,000 barrels of oil a day for over three years.

That’s a lot of oil. So much so that several oil companies came from that one find.

The farmer became an instant millionaire.

You see, the oil had been under the ground the entire time. He had owned the same land for many years.

He had worked that same land for many years.

But here’s the key; the most important part of the story …

The oil under his land was of no value to him until it was brought to the surface and sold to the market.

Only then was the oil, which had been there all along, worth any real money.

Now for how this applies to you and me.

We are sitting on a gold mine of untapped wealth and potential.

We just need to bring it to the surface and offer it to the market.

That untapped potential looks different for everyone.

No matter who you are or where you are you have this wealth inside you right now.

The only thing left to do is to bring it to the surface, offer it to the market and turn it into money.

In my 12 years of working full time online (plus 20 more working offline) I have seen people go through the same process.

Zig Ziglar did that. He failed as a salesman more times than he cared to count. Then he learned the value of working on a schedule and believing in himself.

The result? Not only did he become a top sales performer but he went on to ignite the world with his public speaking and book writing. No one taught others how to tap into their own potential better than Zig.

Full disclosure – although I grew up very near Spindletop I first heard the story told this way by Zig.

From main street to wall street the world’s success stories are written by those who take the time to “drill the oil” inside them.

If you are thinking “sounds good but that does not describe me” think again.

From the lady who helps people overcome thyroid problems with natural remedies to the woman who knows how to bake the perfect cookie to the guy who knows email marketing better than anyone else, people just like you and me are living their dreams.

I know it’s true because I’m one of them.

And I believe you are one of them too.

My goal is to share with you how to do just that — how to “drill the oil” inside you and turn that into your profession, into your living.

I for one am looking forward to the stories we will all have to tell as we take this amazing journey together.